We’re delighted that Echo Echo has been recognised in the shortlist for the annual #Emcees Awards for Excellence in Fundraising alongside some very well known arts organisations!

Echo Echo Festival of Dance and Movement has been shortlisted in the Best Campaign Under £100k category for its campaign to produce a fifth edition of the international festival in an increasingly challenging funding environment for many arts organisations and artists working in the province.

Featuring the work of over 50 artists from near and far across 30 events, the 2017 edition of the festival was supported by such a wide variety of funding partners including Arts Council NI, The National Lottery, and Derry City and Strabane District Council.

Trusts and foundation festival supporters in 2017 included the Esmée Fairbairn Foundation, the Esmé Mitchell Trust and the Foyle Foundation who have recognised the value of the work, particularly in reaching out to new audiences in primary and secondary schools around the northwest.

Other elements of the Echo Echo Festival fundraising mix came from new and existing audiences, participants, volunteers and supporters through Festival passes and ticket sales, and some very kind charitable donations.

You can view the full #Emcees Awards shortlist here. Winners will be announced on 1st May.

Images from Echo Echo Festival of Dance and Movement 2017

This is How we Fly in concert at Cultúrlann Uí Chanáin

“I most certainly will return to Echo Echo in the future. It is such a unique event in the dance world – I can’t think of another place that is so inclusive, and takes such care in how it communicates its vision of dance.” Artist Feedback

“I loved the wholesome and caring feeling of the whole festival. I appreciated the inclusivity, it is actually a quite rare thing. I also loved the fact we got to work and learn with artists whose performances we saw. It made both the performances and the classes more meaningful and resourceful.” Artist Bursary Programme Feedback

“Thanks for today. It was a wonderful experience this morning. The way the performers adapted to the spontaneous participation of some of our pupils was truly magical. I wish we had it videoed. A young man with severe learning difficulties said to me during the show, ‘This is amazing’.” Principal, Ardnashee School

“Amazing. Great performances from all around the world in bite-size pieces. As always exceptional. You would get it nowhere else in the North West.” Audience feedback on Short Works

“Lovely! First time ever watching something like this. The kids loved it, the dancing and singing and music were all fantastic! Not a peep!” Audience feedback on Mini-a-Tour

“A jewel! A Masterpiece! All literature, art, poetry…..danced! So beautiful, tender, magnificent, I don’t think I have ever seen anything so good!” Audience feedback on Voices/Echo Echo

Echo Echo begins a new term this weekend with huge uncertainty hanging over the arts sector again this year due to continued funding cutbacks. Despite this ongoing additional pressure, the confirmed programme of work planned by Echo Echo for the year ahead is one of our busiest ever.

Company artists have already worked in Germany, Sweden, Finland and Ukraine this year and further international projects by Steve Batts in Holland at the Lorentz Institute and Contact Bucharest Festival in Romania in June will be followed by Echo Echo Ensemble Artists touring in Sweden in September.

International guests from all around Europe will arrive in the city for the first Echo Echo Contact Improvisation Festival in Derry in May; and for the sixth international Festival of Dance and Movement in November – the Festival has already shown work of over 200 artists from home and abroad. A fifth Festival Open Call will open for entries soon after receiving over 400 applications from around the world to date! 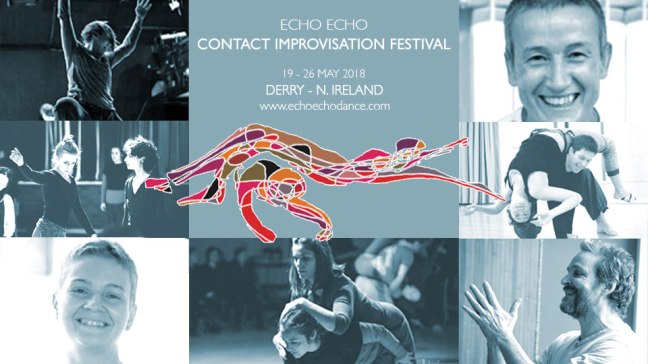 Nationally, Echo Echo ensemble artists continue to connect their work and the company to artists all around Ireland – Ayesha Mailey’s ACES project at Crescent Arts Centre in Belfast through 2018, a Contact Workshop tour of Ireland with Zoe Ramsey and Tonya Sheina next week, acclaimed clown Joe Dieffenbacher working with local artists later in April, the third Festival Artist Bursary programme in November, and an all-Ireland tour of the winter-themed production for younger audiences Lost in Frost in December. Echo Echo is collaborating with Warwick University, Queen’s University, Big Telly Theatre and Bbeyond Belfast on the TIME project which will be shown in early 2019.

Locally, the company will continue working in partnership with fantastic groups at Tuned In Project, Strabane Community Project, Praxis Care, Cedar Foundation, Causeway and Glens Council, and Claudy-Comber PS (to name but a very few) on a series of participation and performance projects over the coming year. An ongoing programme of artist residencies and music events are hosted at Echo Echo Studios on a regular basis by local and visiting artists and musicians.

Interested in finding out more or getting involved? Have a look at our website listings for new term information with a range of upcoming classes and events for all ages and abilities.