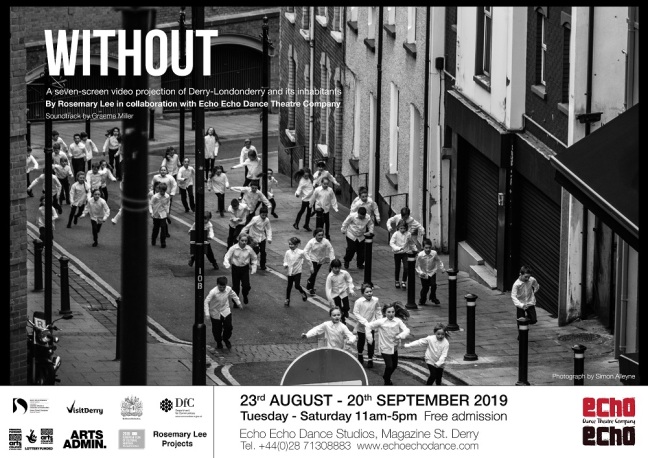 Echo Echo Dance Theatre Company is delighted to announce the return of WITHOUT – the hauntingly beautiful seven-screen film installation by Rosemary Lee and Echo Echo that was created for City of Culture 2013.

Without has been described as “a spectacular poem of the city” and “one of the greatest artworks I have ever seen” by audience members in 2013 and the work subsequently toured to Dublin Dance Festival and British Dance Edition in Cardiff to very wide popular and critical acclaim.

Director of Without, Rosemary Lee, is one of the UK’s leading choreographers. Reflecting on the process of making the work in Community Dance Magazine recently she said:

“Without seemed to produce a sense of seeing their city through fresh eyes for some of the general public who came to see it. One lovely piece of feedback from a man in his sixties made me feel that we had done the right thing. He said, ‘Thank you. You’ve helped me see my city through new eyes and see it at peace.’”

Around 500 people were involved in filming Without during April 2013 including cyclists, tea-dancers, skateboarders, dancers, and hundreds of local primary school children. Many thousands of people watched the work being filmed around the city from Bishop Street to the Guildhall, from Ebrington to Creggan.

“I am delighted that this event has been included as part of the Council’s Walls 400 programme that sets out to showcase a wide range of local cultural and arts projects across the city and district. Good luck to everyone involved and I hope it is a huge success.”

“The Arts Council of Northern Ireland is proud to have supported the development of this powerful and moving work in 2013; a project that was hugely engaging for the local community that helped to create it. Following a successful tour in Ireland and the UK, we’re absolutely thrilled to see this special work return to the city where it was created to be enjoyed by many.”

The seven films of Without are shown concurrently, in-the-round, in a specially created installation accompanied by an original sound score by Graeme Miller. Each full cycle lasts 22 minutes and is shown on a continuous loop.

Without will return to the city for a month-long exhibition from Friday 23rd August 2019 at Echo Echo Studios in Magazine Street as part of the Walls400 programme of events.